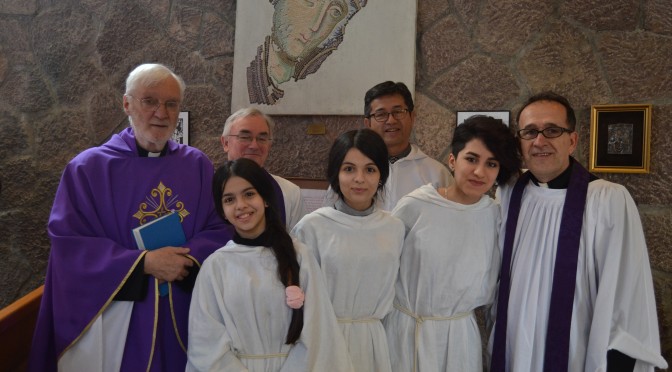 A visit to Ankara

In 2015 Moffat Residents Rev John Stevenson and his wife Jane were invited to go to Ankara, the capital of Turkey to minister, on a temporary basis, to the congregation of St Nicholas of Myra, Anglican Church in the British Embassy. The previous priest Fr John Higgins and his wife Kay , having returned from a three year stint in the capital. There are a significant number of refugees from Iran, within the congregation of St Nicholas Church, who are supported in their worship and journeys of faith by Father Ebrahim, an Iranian Christian who is also a refugee. Rev John and Jane also became involved in providing food, in the form of sandwiches, for refugees, waiting all day for interviews, within the United Nations High Commission for Refugees (UNHCR )compound. Rev John made a request to the Annandale Group of Episcopal Churches for funds and clothing to aid this work, and in particular to support Father Ebrahim in his work, not only in Ankara but with Iranian refugees throughout Turkey, and with the Christian ‘House Churches’ in Iran. The response was very generous, and money was sent out to Turkey.  During their final tour of duty, a new priest having at last been appointed, Rev John and Jane invited Rev John and Maggie Macleod from the Annandale Geoup of Churches to visit them in

Ankara to see the work that was being done and to meet FatherEbrahim and his Iranian flock, and the ‘sadwich-makers’. They were also asked to carry out hats, scarves, gloves and warm clothes for distribution to refugees. 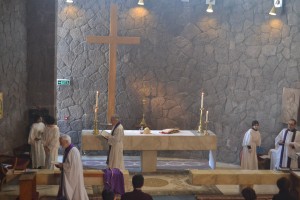 During their week’s visit Rev John and Maggie visited St Nicholas Church and took part in the Sunday morning service by leading intercessions and reading the lessons and Gospel. Maggie led the congregation in singing a Taize chant; being a member of the Scottish Servers’ Guild she was particularly pleased to talk to the teenage Iranian girls who were performing the roles of acolytes and servers during the service. Translations of the service, the readings and the sermon are provided for the Iranian Farsi speakers by Father Ebrahim. 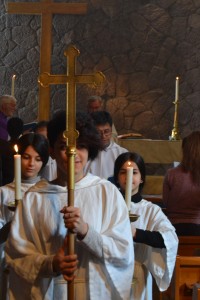 A visit was arranged to Margarita, an Italian lady, married to a Turkish national and a convert to Islam, who organises the making and delivery of sandwiches, juice, toys and clothes for babies and adults, to those waiting for interview in the UNHCR building. 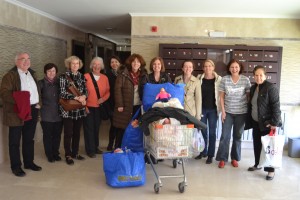 This was a very social occasion, at which the Rev Macleod was the only man! All the ladies came from different countries and backgrounds but were gathered in by Margarita from an amazingly multi-cultural mix of contacts throughout Ankara.The sandwiches, 120 to be made on the day of the visit, were made very systematically. 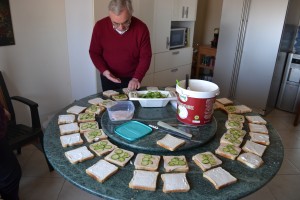 They were then packed up along with fruit drinks, toys etc and wheeled along the road in a shopping trolley known as the ‘Mercedes’. No filming was allowed in the UN Compound and the security was strict. The waiting room was filled with families waiting patiently for the all-important interview to determine refugee status. Children waited quietly, two little girls with burns to their hands and faces sat colouring at a table, a lone young woman wept silently, her husband was somewhere in Europe, but she didn’t know where. Food was gratefully accepted, toys were triumphantly displayed in small hands, shy young mothers had baby clothes and accessories pressed upon them by Margarita …. Most had waited months – years for this vital interview. If refugee status was granted they would be allowed to travel to another country and start a new life. But if they could not show that they were genuine refugees, or if the stories told by man and wife, in separate interviews, did not tally then they would have to start all over again and begin the lengthy process of reapplying.

The many gifts of clothing were given to Father Ebrahim and to Margarita. These came from all five churches in the Annandale Group, many were new and others handcrafted. All were received with much gratitude, Father Ebrahim was overwhelmed by the care and generosity shown by people so far away. Although in Ankara the sun was shining and the temperature like High Summer in Scotland, he knew of refugees in Trabzon, to the North on the Black Sea, where it was still Winter and where the warm clothes would be most welcome. 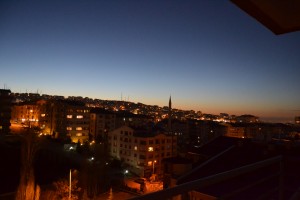 The lovely Iranian family whose beautiful, bright daughters were acolytes in St Nicholas church were waiting on tenterhooks to be told the date of their departure to Canada …. It had been put back by the influx of Syrian refugees, so they said. But the girls were looking forward with some trepidation, to a new life, they were looking forward to going back to school, they had not attended for four years. They had been given homes in a town outside Ankara, but there was no work for their parents, so the parents moved the family to the work in the city, but took them away from the school to which they were supposed to go in the town. The girls taught themselves English from the TV and the Internet.  They were fluent. 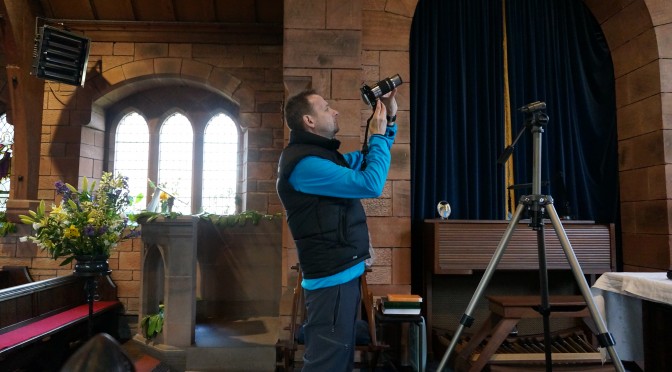 Work to get lots of new photos for the website is well underway thanks to Robert Leadbeater, Ronald Ritchie and myself who spent about 3 hours capturing some pictures of our beautiful church.  Ronald and I did most of the moving and arranging while Robert did his ‘magic’ taking the photos.  There was also a great deal of talking and laughter while Robert took over 250 photos; I took a few which are the ones added here. It will take some time to get it all together so  ‘Watch This Space’ as they say.

Many thanks to Robert and Ronald for giving up their Easter Monday. 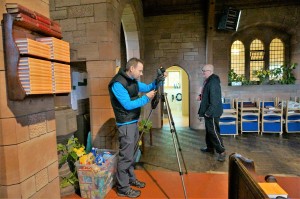 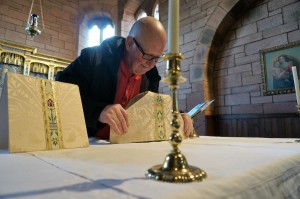 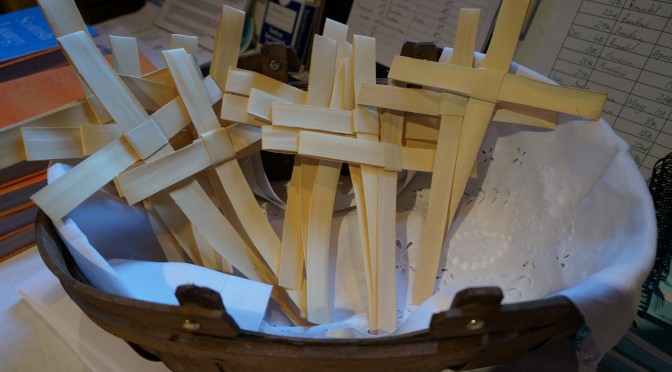 Blessing of the Palm Crosses

in the beautiful spring sunshine

2016 Retreat in Daily LifeSunday, 3rd April – Sunday, 1st May This is a retreat experience woven into your everyday life which offers a time to pause, to reflect and to refocus. It is a chance to try new or fresh ways of praying and become more aware of connections between faith, prayer and everyday life. 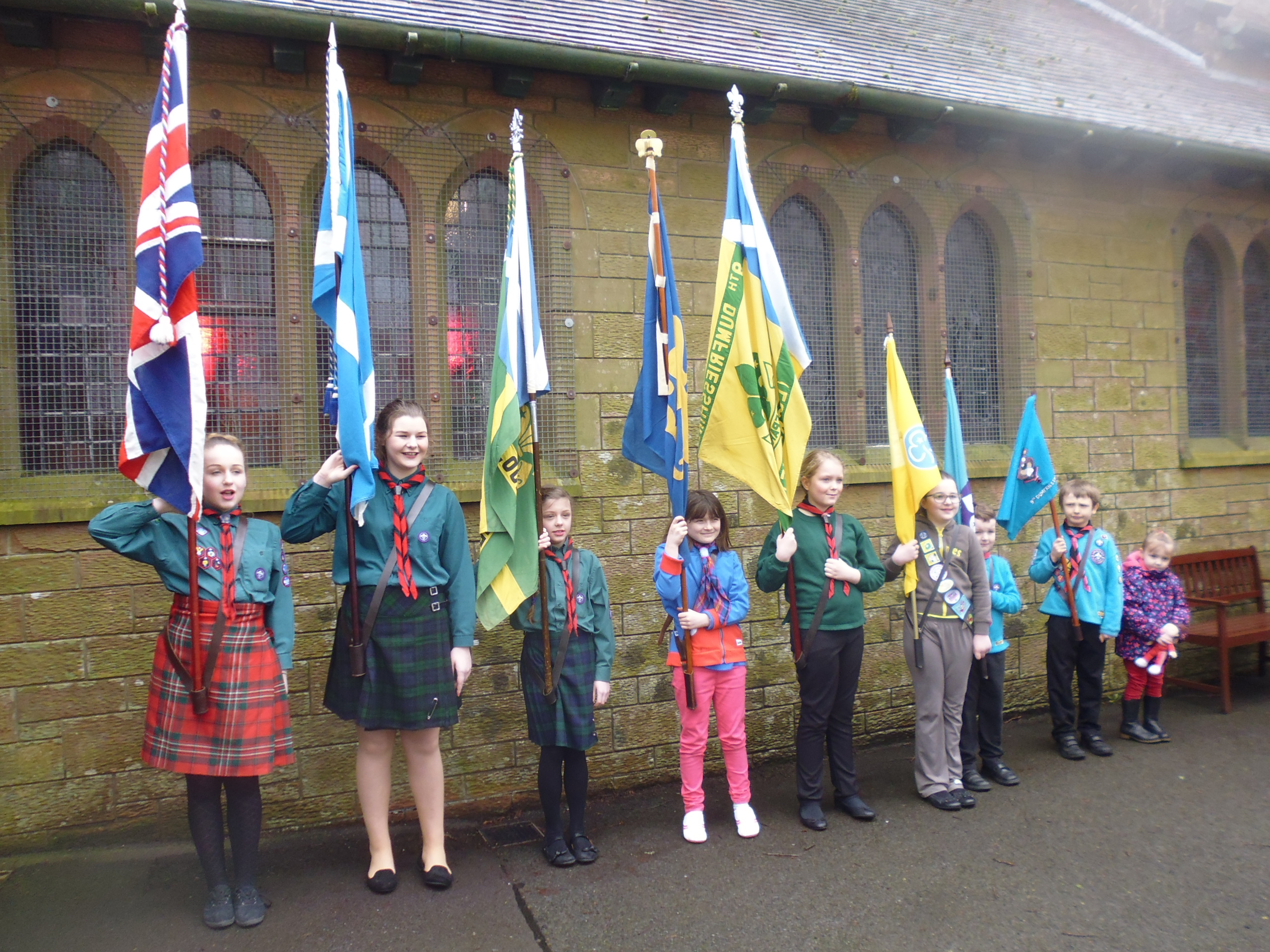 All Saints for Morning Service 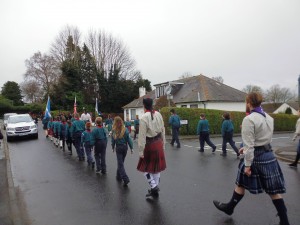 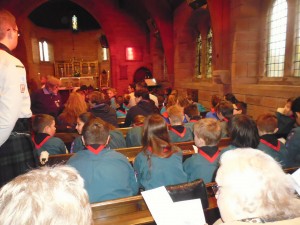 The Psalms – prayers for todays church

This course is a York Course entitled “The Psalms – prayers for today’s church” and it is intended to run it on Thursday afternoons during Lent as shown above. The first part of the afternoon will be taken up with our discussion and we will conclude with an act of Holy Communion and so these sessions on these days will take the place of our regular Thursday afternoon services of Evening Prayer and Holy Communion. Those attending will be provided with a copy of the course booklet. 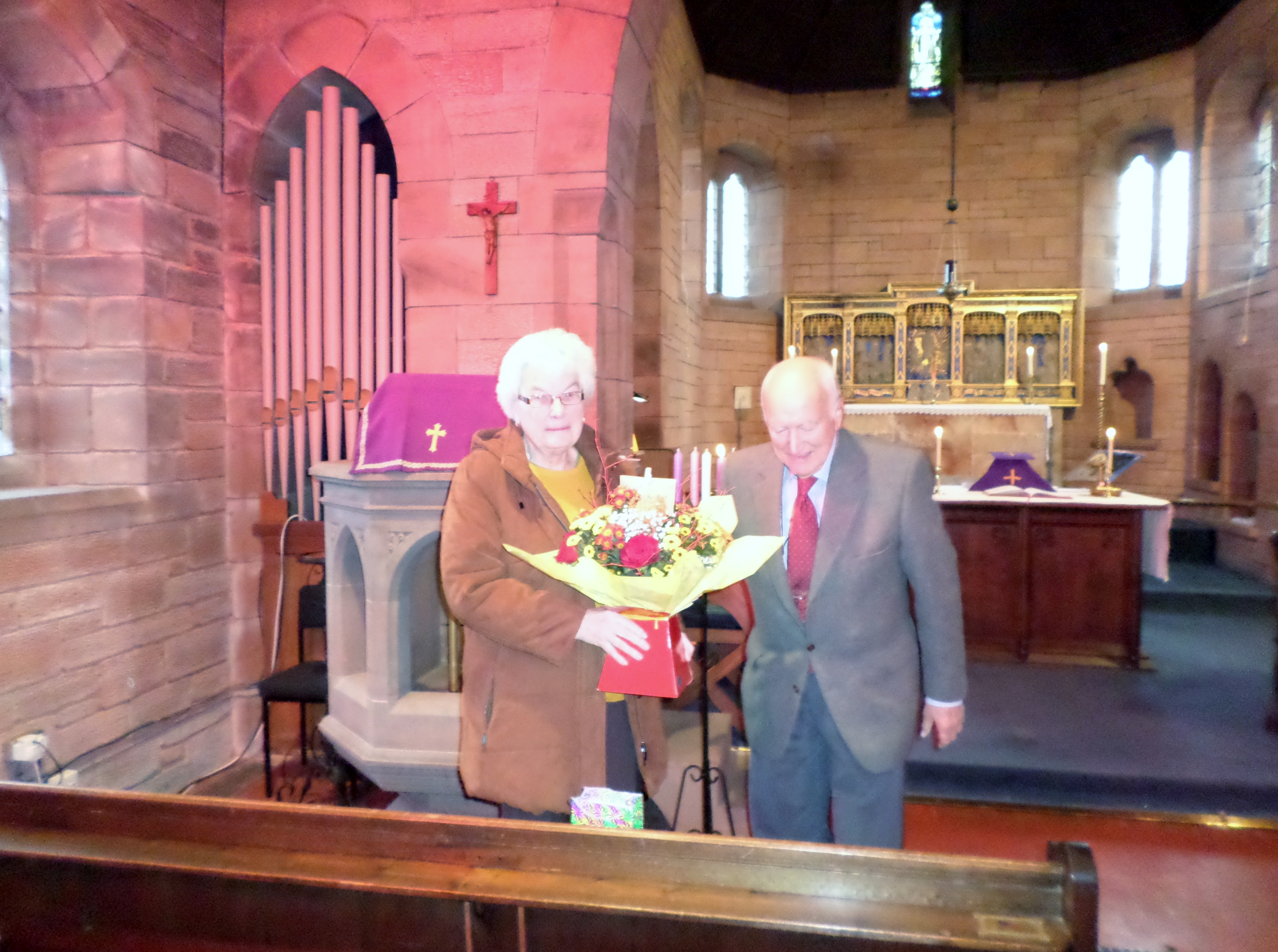 Avia, along with husband Eddie, are moving from Moffat to Masham, Yorkshire, in the first week of December 2015

The contribution made by Avia to All Saints Church and its members has been outstanding; for many years a member of Vestry, Secretary to the Vestry, Rector’s Warden, Website Manager, All Saints rep. on the Annandale Group of Churches and always a very accomplished organist when required. Avia developed and maintained the Remembrance Book in the Church and always gave very generously including the marble inscribed stone to mark the Queen’s Jubilee tree in the Church grounds

As a wonderful and powerful soprano, Avia frequently led the singing of hymns, especially the unknown or new ones. Sitting in the rear pews, all were given confidence to sing out.

We will miss her greatly but know that another small church in Masham will benefit enormously from her presence. She goes with our blessings and prayers. 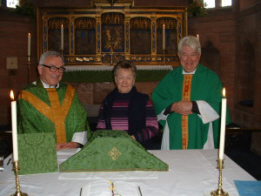 List of readings and sermons when available can be found here…https://lockerbieanglican.org/884-2/

Taizé  service is held usually  once a month on the last Thursday. If you would like to read more about Taize please click the link above.

Almighty God, who sent your servant John the Baptist to prepare your people to welcome the Messiah, inspire us, the ministers and stewards of your truth, to turn our disobedient hearts to you, that when the Christ shall come again to be our judge, we may stand with confidence before his glory; who is alive and reigns with you and the Holy Spirit, one God, now and for ever. Amen.